skip to main | skip to sidebar

My heart has broken.  My friend Lana died, suddenly and unexpectedly, a week ago today.
She was young (46), beautiful, strong, sweet, and one of the most compassionate and truly kind people I've ever known.

Although I am a person of faith, I'm really struggling as to why God would take someone in the prime of her life and someone who was a single mother to an 18 year old daughter.  That daughter is now without her biggest cheerleader and her fiercest advocate and champion.

Lana's soaring spirit was in stark contrast to the shit storm that life threw at her.  Her own mother committed suicide when Lana was only 4, and her father was sent to prison not long after that.  She was raised by an aunt and uncle, and wound up dropping out of high school.  Despite that challenging beginning to her life she pulled herself up and wound up getting not only her college degree but a Masters degree in Social Work.

In fact, that's how I met her.  She was the Social Worker assigned to my son when he was a tiny, medically fragile baby.  We quickly became great friends, and wound up giving birth to our daughters (my second child, her first) within weeks of each other.

When she went through her divorce from her abusive first husband, I saw her once again pull herself up and push through it.  Lana was a RELENTLESS optimist, always looking for the best in people, and always staying incredibly positive.

Later she wound up remarrying, but (eventually) endured another divorce, several years later.
Despite being heart broken after the breakup of her second marriage she once displayed bravery and grace and pulled herself up and moved forward.

And now, with no warning, she is gone.  And per her wishes, she did not want a funeral or memorial service.  To me, that is the hardest part.  The fact that the death was sudden and now there is no service leaves everything feeling so surreal; so unfinished.

So I mourn for my friend, and for her daughter.  And for the goodbye I wasn't able to give her.
Rest in peace Lana.  I love you.

These are 2 photos of my basement.  Now, before you read any further, let me assure you that the rest of my house looks nothing like this.  Actually, the rest of my house is quite nice... organized, (relatively) clean, pleasant and inviting.  However, because we've been living in this house for almost 13 years and have used the basement only for storage (read: DUMPING stuff we don't quite know what to do with...) it has morphed into THIS.

So, I told my husband (who is the most laid back man on the planet) that we either clean out and organize the basement (and NEVER let it return to this current state), OR... we call the producers of "Hoarders" and have them come out and film an episode. 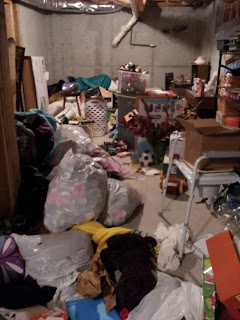 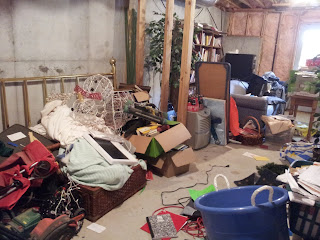 I normally LOVE the 4th of July.  Typically we are at our place at the beach, eating, drinking and having lotsa fun, but since it is now rental property (and thus, RENTED all Summer) we are home.  And THIS year on the 4th, in Atlanta, it is Monsoon Season.  A complete deluge.  I have 5 consecutive days off work and it's supposed to rain for every one of them.

So here I sit, with a barometric-pressure-induced migraine (my fail-proof migraine meds are only partially BLURRING the edges of the pain and not getting rid of it... yuck...).  Add to that the fact that one of my 2 Labs HATES fireworks and is nervously pacing back and forth, licking her lips (nervous tic) and barking.  SIGH.

BUT... it is Independence Day and a day to be thankful that we live in a great country and have our freedom.  I am indeed thankful.

Happy 4th to one and all!

I voted for Obama in 2008.  I admit it - I bought into the hype, and the whole hope-and-change bit.
Well, 4 years later and I can tell you that "hope-and-change" was little more than "smoke-and-mirrors".  Granted, Obama is intelligent, interesting and a fabulous orator, but as a leader he is woefully inept.

In my opinion, the president has two MAIN duties above all others: 1) protecting our interests at home and abroad; and 2) ensuring (as much as possible) that the economy stays healthy and that people can find jobs.
So, how has he done? National Security: bin Laden is dead. This was big. However, since then, his record has been lousy. He routinely ignores his security/intelligence briefings, and his response to the Middle East crisis has been (at very best) extremely lukewarm. Iran will very quickly become a nuclear power, and he's done almost nothing to stop this. (Case in point: he's too busy to meet with Israeli PM Netanyahu, but yet has time to film "Letterman". REALLY??)
The Economy: again, abysmal record. Unemployment is still ridiculously high; real family income is practically in free fall; and he really truly feels that government is "the answer", as opposed to the private sector.
Now, I'm FAR from a Romney fan, but I find myself asking: do I want a charming intelligent yet INEPT leader marching us 4 more years towards Socialism.... or do I want a somewhat stiff and cloddish capitalist who UNDERSTANDS Economics 101 and wants to work to pull us out of the quicksand, before we sink deeper?
In my mind, the answer is very clear.
Posted by HWHL at 10:09 PM 3 comments:

Death of a Hero

Today is a sad day for me... one of my (literary) heroes has fallen off her pedestal.  As in crashed to the ground and shattered in a million pieces, fallen.

I really really love Ann Lamott's writing - I think she is profoundly talented.  I've written about her before on this blog:  Bird by Bird, Operating Instructions, and Traveling Mercies are some of the BEST non fiction books I've ever read.  Ever.

She is smart, wickedly funny and a great independent thinker but OH.MY.GOODNESS are her FaceBook posts irritating. She is wildly self-absorbed... just over-the-top.

Hope all is well in the blogosphere... and THANK YOU to ChiTown Girl for suggesting I put my toe back in the water.

We WERE on vacation on the Georgia coast until T.S. Beryl sent us home early...  Hubster and I love good storms, but this was just 5 miles shy of a hurricane, and walking on the beach a few hours before landfall was enough for us to realize it was time to head back to the ATL.

MAKE SURE you take time to remember those who died to defend our country, and our way of life.  And, if you know a veteran, or an active-duty serviceman (or woman) tell them THANK YOU!
Posted by HWHL at 9:50 AM 2 comments:

Drove through a cast iron beyotch of a storm on the way home from work tonight. Tops of the storm towers were up to 49,000 feet. (According to WSB meterologist extraordiaire Kirk Melish.) That's pretty dang high. Lightning was striking all around me... the rain was falling in horizontal sheets and the wind was amazing. I said out loud inside my car "Dang." (That's what we southern girls say out loud when something is Most Impressive.)

I considered, briefly, heading to the gym during the enduring monsoon but thought better of it... not only due to the fact that I'd be putting myself in immediate peril, but due to the fact that my body is SHOUTING LOUDLY that it hurts. Yes, I joined a gym last week... YES, I'm working out now and YES I really enjoy it. But my muscles that normally aren't used during my daily Insurance Nerd-SuperGirl duties are muttering and COMPLAINING LOUDLY..

My biceps are bitching.
My quads are quibbling.
My glutes are..... grumbling....

BUT (damnit) I'm going to lose 10 lbs and be less jiggly if it KILLS me (and it just might).
But the lightning won't be killing me. (At least not tonight.)
Posted by HWHL at 8:17 PM 4 comments:

So, it's been 20 zillion years since I've updated this blog. (Well, actually it's only been 4 months, but in Blog Years, that's equal to 20 zillion, give or take.)

What's new with me.... let's see.... WORK keeps me busy... the KIDS keep me busy.... the STUD MUFFIN I married keeps me busy. Just general life stuff, ya know. It's all good though. I have very few complaints. Very few. Still wondering what it would be like to be a tall leggy blonde, but being a petite curvy brunette works just fine. :)

I really hope Becky doesn't mind my sharing... but she is brilliantly FUNNY...a GREAT mom.... a talented photographer.... has a handsome, funny son... and this post had me almost FALL OUT OF MY CHAIR from laughing! Really!! :)

LOVE IT... I can just SEE these little boys bragging and trying to "one-up" each other... if only they KNEW how grossed out little GIRLS would be! :)
Posted by HWHL at 7:22 PM 4 comments:

Tomorrow, March 2, it is supposed to SNOW in Atlanta. Up to 3".
This will be the 3RD snow (measurable snow) we've had this Winter.

Normally it doesn't snow here. Almost ever.
And when it does, it's more like a decorate little thing that goes away.

The snow is supposed to arrive around 9 AM.
RIGHT as we're all arriving at work..... wonderful.

Excellent message - Economic Gleanings - definitely worth a listen.
Posted by HWHL at 10:12 PM No comments:

So today, we moved into our new office.
Palatial. Swank. Posh.

And hey: my little cubicle is "all that AND a bag of chips".

Some days I really do miss being my own boss and having my own business.... there was so MUCH I loved about being an entrepreneur. But then I remember how absolutely terrifying it was when I went 5 months straight with no income when all my clients, save one, dried up and blew away like so many tumbleweeds....

So I am THANKFUL that I am employed.
And that I have a paycheck, guaranteed, on the 15th and 30th of every month.

And really. Our new office IS really nice. I'm not really sure why being there today underscored what I used to have, and lost, but it did....

Time to go find that Glass Half FULL mentality.... it's around here somewhere...
Posted by HWHL at 7:03 PM 6 comments:

This is yet another reason why I love my church.
We do REAL stuff, in the REAL world.

Today Kevin announced that we as a church have committed to contributing $600K over the next 2 - 3 years to build permanent wells in Mozambique so people can have CLEAN WATER.

CLEAN WATER.... get that? Something you, and I, take totally for granted. I can go to my kitchen tap, turn it on, and not worry about getting sick or DYING from what is in my water. But in parts of Africa more people die from water-borne illnesses than from HIV/AIDS. Horrifying.

I love that 12Stone is doing this.

Above is the video about the issue that Kevin played this morning.
Posted by HWHL at 11:16 AM 6 comments:

Need to Google Something?

This Week I Am Especially Grateful For...

Curious About God? Check out these sites....

HWHL
Happy Wife Happy Life (HWHL)is happily married to The Tall Cool One (a/k/a "Hubster"). We have been married since 1992 and have 2 wonderful kids. We lead a quiet, unassuming life and enjoy cooking, laughing, movies, music and each other. 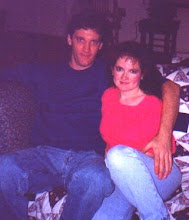 A Couple of Wonderful Writers

An Amazing Book That Will Change How You View God.... 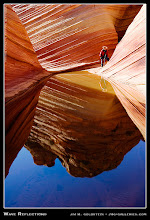 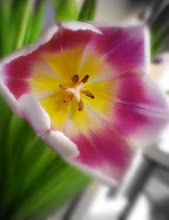 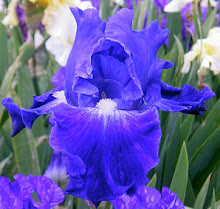 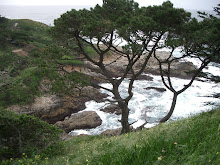